ADDITIONAL INFO: The HAW is the nictitating membrane or the third eyelid. These membranes are the same in different breeds and sizes of dogs, although the pigmentation of the third eyelid may vary from breed to breed.

WHY IS THIS IMPORTANT?

The American Bulldog (AB) is a predominantly white dog. We may have seen a lot of ABs with pink eye rims (edges of the eyelids), particularly the full whites or those that are white on the face, whether it's patched on one side or full white faced. Most may see this as cute because it's pinkish, but it is in fact a cosmetic fault. HOWEVER, please understand that ABs without pigmentations around the eye rims should in NO WAY be considered rejects or of low quality. Owners of ABs with pink eye rims should not be discouraged by the lack of pigmentation. This does not diminish the quality or value of the dog (and it doesn't add to it either). It just simply means that they lack the black pigmentation on the eye rims.

White ABs without the black pigmentations (sometimes dark brown) on their body is considered to have a weak (or poor) skin pigment. They are prone to sunburns. This conformation standard is not only important for showing dogs (for added points and to look good), but it is most important for the dog's vision too. The black pigment acts like a visor to reduce the glare of the Sun. Having black pigments on the eye rims has the same effect as when you try to narrow the opening of your eyelids so that the eyelashes could filter the glare. Notice that American football players put the black strip or paint under their eyes? It's not done as an added “effect”, but it is in fact done on purpose for them to see properly by filtering the glare. 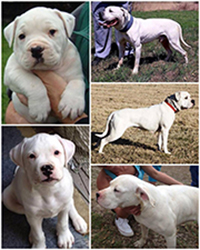 The photo here shows two AB puppies on the left. The puppy on top already has the pigmentation visible around the eye rims while the puppy below has yet to develop it. Please note that this pigmentation may develop or appear sooner or later on different puppies, but some puppies may not develop it at all. Again, it's not to be considered a sign of poor quality, it's just that the puppy/dog does not have it. In any case that the dog lacks the pigmentations, we as owners may have to try and avoid walking or working our dogs under a bright and glarey Sun. We may want to consider early morning or late afternoon activities for our dogs. You may also notice that the warmer or more worked up the dog is, the brighter the pink rims become (if they lack the black pigment). This indication is telling you to rest your dog, cool them down, and bring them under the shade.

Getting to know more about your AB helps you maximize their potentials! #ThunderBeastCrew